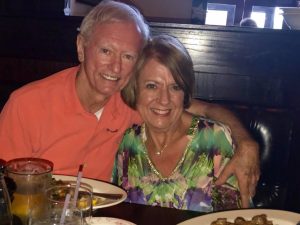 Sadly, I need to open this report with some devastating news. One of our active members, Dennis Wilson, passed away in March,
a victim of COVID-19. He was the sort of guy that everyone liked. It seems that he always had a smile on his face, and he was a
gentleman both on stage and off. Earlier that month he had qualified for our annual stage contest (a contest that he might have won last year had he not barely exceeded the time limit), and he also performed in our quarterly close-up contest. His talent and his personality will be sorely missed. Two other members who were present at the same meeting also became seriously ill from the same virus (names withheld out of privacy concerns) but
seem to be on the road to recovery as I write this. The rest of us had a real scare for a couple of weeks but seem to have escaped the plague.
Sheltering in place is no reason to cancel a meeting in the era of ZOOM, so our April meeting went on as scheduled as we shared the magic via our laptops and ipads. Rather than bemoan the lack of in-person contacts, many members were quick to point out the advantages, some even suggesting that if we ever get back to normal we should also livestream our meetings. The principal advantage was that physical distance is no longer a problem, as well as the unfortunate circumstance that few people have conflicting events to worry about. Members who have moved away—Doc Blum (Texas) and the Brewer family (Hawaii)–were happy to
join us, as well as friends Jeff McBride (Nevada), Larry Brodhall (Nebraska), and Joe Turner (Georgia). About fifty people were logged in, not including others sharing the same laptops.
Following some opening comments from ring president David Sandy, Duane Roberts taught a mentalism routine using a calculator, and Pete Walterscheid shared another version. Special guest Jeff McBride talked about the symbolism of the linking ring in that magic connects us to one another. He also taught a card move, and he spoke with excitement about the fact that a few days later
he was scheduled to be the closing act of the largest magic event in history, the Vanishing Magic streaming event. This is a tough time for working pros.

Hopefully things will pick up before too long. 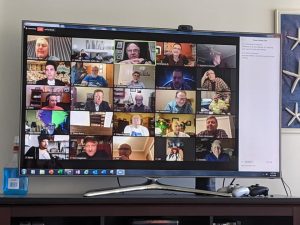 Well, we ZOOMed into May for our second on-line meeting, for which president David Sandy had prepared a full agenda. Former
IBM international president Don Wiberg visited‖ from Illinois to share his birthday with us. He shared some memories of his
visits to Kansas City, including two IBM conventions, both of which included fire alarms at the convention hotels (one false
alarm, one real fire). He also showed us a miniature replica which he had constructed of a room where he keeps his apparatus, and
a painting which his wife Joyce had painted as a copy of Bosch’s The Conjuror. Terry Magelssen provided the latest edition
of ―Tips from the Road,‖ advice from our working pros on how to present a show. He included advice on how to dress for a show,
the use of makeup, and how to prepare for emergencies by having various tools for lastminute repairs. He also gave us tips on how
to make people remember your name so they can help you get future bookings. David Sandy then presented his Collectors Corner demonstration, showing us a dancing
handkerchief and a vanishing bird cage from Blackstone’s collection. Several magicians took part in the share the magic‖ segment, each providing a single routine. Phil King showed us a packet trick where a royal flush appeared on what had been five blank faces, and the backs changed color. Shaun Rivera had a selected card replaced in the deck, put the deck back into the
box, wrapped the deck in a handkerchief, and extracted the selected card. David returned to show us The Fantastic Figures of Fu, a numeric puzzler. Wayne Peterson showed us a
self-working card trick embedded in a magic book. Dennis Burks (with a different look, since he has given up shaving while working at home) changed a package of candy into a
rainbow silk. Korso then showed us some linking-ring moves he has been working on. The highlight of the evening was a lecture by Keith Fields, who is originally from England
but was joining us from his present home in Michigan. Among other things, he discussed the importance of personality in presenting magic, including a reminder to smile as
much as possible. He and his wife, Lady Sarah, discussed how they had recently developed their two-person act, in which Sarah was a partner in the act rather than an
assistant who hands the magician his props and climbs into boxes. He also taught a few tricks and gave us tips on how to improve our presentations of the Professor’s Nightmare.
At the conclusion of his presentation, he generously provided us with some free stuff, including a download of a book on performance tips and a video of a previous, in-person lecture.

David indicated that he would like to invite him to lecture in person when the pandemic is over.

Speaking for my-self, I am really looking forward to that.