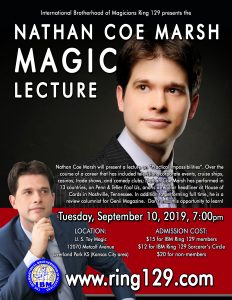 Over the course of a career that has included television, corporate events, cruise ships, casinos, trade shows, and comedy clubs, Nathan Coe Marsh has wowed audiences in 13 different countries with incredible original magic. And now, for the first time, he’s going to share that magic with you.

Every item in Nathan’s lecture has been featured by him in real world, professional performance – and he’ll teach you everything you need to know so you can perform them too. The first half focuses on stand-up magic (with an emphasis on strong stand-up magic that 1. does not require on-stage assistants and 2. packs small and plays big). The second half focuses on close-up magic.

Part I: Stand-Up Magic
• A Spirited Opener
The startling visible vanish of a silk followed immediately by the production of a full shotglass. This is a 1-2 punch that, in under 90 seconds, grabs the complete focus of an audience while also setting the atmosphere of fun for everything that follows.
• Nathan’s Chop Cup
Nathan’s stand-up chop cup routine that incorporates a Michael Kaminskas touch (with permission) in a new way to dramatically increase the impact of the final loads.
• Bare-Handed
Any card called for is caught out of mid-air. The spectacle of a card sword without the cost, and Nathan’s new technique for controlling a named card from a memorized deck has many applications for both close-up and stand up (for non-memdeck users, this revelation is also powerful with a chosen card).
• Balloons
Stage-filling, astonishing, comedy mentalism that packs small and involves no on-stage volunteers.

Part II: Close-Up Magic
• Smart Coins
Featuring a charming, motivated, topical, and original presentation that steers clear of what Eugene Burger termed “the adventures of the props in the magician’s hands” script that is typical of coins across, Nathan’s version blends brilliant work from Roger Klause, Larry Jennings, and Mike Pisciotta to create a strong routine that gets gasps.
• Card Divination
Inspired by a single sentence in Juan Tamariz’ Mnemonica, this is the card routine Nathan has performed every single time he has done close-up magic professionally since 2004.