Cost: $25 per person (includes show, food and close-up magic included) THROUGH MIDNIGHT JANUARY 19TH.  The price will increase to $35 per person through JANUARY 23RD after which all ticket sales are cut off.

Seating in the theatre is limited, and seats are reserved on a first-come, first-served basis. Tickets are $25 per person and include food,  the  H. Claude Enslow Stage Competition for 2020 competition, strolling close-up magic and other excitement.

Why should you attend?

Support Your KC Magic Peers in Their Quest for the Title of the H. Claude Enslow Award for First Place in Stage Magic IBM Ring 129.

Cheer on your fellow magi and friends who have worked hard throughout the year to qualify for this prestigious event!
Delicious Food from Unforked.  If you’ve not been to Unforked before, check out their reviews. Our food promises to be spectacular!

Support the Club and Celebrate Our Year Together. Beyond the show and the contest it’s going to be a great celebration of our magic community and the fun that we’ve had in the last year. 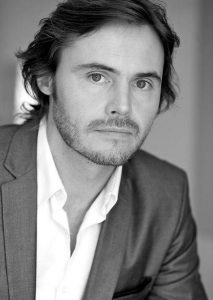 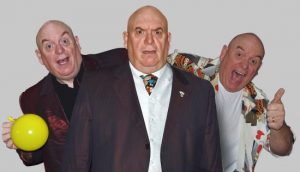 Martin Cox has been a well-established Entertainer, Magician and Comedian for last 30 years and has performed extensively both in the UK and US. He has performed his Comedy act at the Blackpool Magic convention, The Magic Castle (USA) and is a regular performer at the Fechter’s Convention in USA. He also has some TV performances under his belt which shows he is an all-round entertainer.

His new lecture called “Fistful of Magic” has been well received at a number of magic clubs and conventions. It is not just about the tricks. It’s about the person and the performance. You will learn his unique approach and some great new magic that you will be able to do immediately.

Awards are many and include The Rove Trophy and Alistair Wand from the International Brotherhood of Magicians, Edgar Crook Cup for close-up magic, and the Norman Green for Technical Merit, and the Billy McComb trophy. In 2003 he won the British Magical Championship of Comedy with his act ‘Cosmic’. He has performed many times at Fechter’s in New York which as earned Him the respect of his peers in magic. Martin has also appeared at Hollywood’s premiere private magic club, The Magic Castle. And is A Member of the Inner Magic Circle with Gold Star (MIMC) Martin Cox is one of a kind! In his lecture you will get to know what makes him tick and what makes his magic so entertaining.

What’s In The Lecture?

Openers:
Cards
Fechter’s Opener
How I meet My Wife
Two Card Tricks that are easy to do but will establish your character
Impossible:
3-2-1
What if
Was in your Pocket
More cards but fun to do
3 impossible card effects
Coins:
Bent Coin
My Three Girl Friends
‘I don’t do Coin Magic’ (but I do these two)
Rope and Stuff:
Ideas that will make you think
Some controls and a Book test with any book
The McClintock Twist
Plus:
Drop
Spread
Two effects
And some info on working in restaurants on stage and stand-up and lots more

“I was crying with laughter” – Dan Garrett

“Martin Cox lecture contains material that is adaptable. He has an edginess that works for adults and a soft side of his humor that works for families. In his lecture he works through pacing, comedic expression, and even some magic!” – James Ember

“By the time Martin had finished his lecture you felt that you knew him personally, and that I think is the sign of a successful performance, incidentally – and it is almost incidentally – his tricks were quite accomplished too. If you ever get a chance to see a Martin Cox lecture – or to see him perform, then don’t even think about it. Just go. I guarantee you won’t regret it.” – Paul Reason, President of the Fez Magic Club (U.K.) 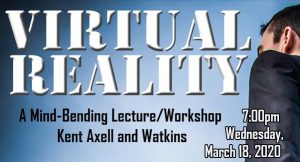 Kent Axell​: A Brief Introduction Kent Axell is a published and professional magician/mentalist in NYC, Vegas, and L.A. The narrative voice of the ‘Maximum Entertainment” audiobook, Kent has a primary focus on stage mentalism. He’s a worker, and his material reflects the reality that there’s no room for fluff when your reputation and your ​livelihood​ are on the line. He’s a director of shows (A Taste of Magic, My Magic, Etc.), consultant for national TV (Brain Games, Fox 5 Etc.), and an experienced, real world performer of multiple one man off broadway shows (Determined, Deceiver, Merchant’s House Mind Reading, and more.) ​kentaxell.com

ATTENTION – APRIL MEETING HAS BEEN CANCELLED BUT WE WILL HAVE A VIRTUAL MEETING USING THE APP ZOOM.  LOOK FOR DETAILS ON APRIL 2ND!

Even though we will not be meeting in person for our April Ring meeting, we are going to hold a “virtual” April Ring meeting!   In other words, we will be meeting online using a wonderful app called ZOOM.  Here’s what will happen… the day before the meeting, you will receive an email invitation.  You’ll simply click on the link in the invitation when it comes time for the meeting, install the appropriate software (for computers) or app (for phones), and you’ll be good to go.  This virtual meeting will feature Teach-A-Tricks, some magic performances, a very unique Collectors Corner, some great discussion, and a very special Surprise Guest (someone who wouldn’t normally be able to attend a Ring meeting)!!!

Lance and I have tested the ZOOM program, and it seems to work very well!  Other magic clubs have already used it as a substitute for their meeting.  I will be sending more information very soon, and we will have a “test run” within the next few days to insure that everyone learns how to participate with the program/software.  I don’t want to spend the first 30 minutes of our April Ring Meeting doing troubleshooting and walking people through the process.  BE WATCHING FOR ANOTHER EMAIL FROM ME SOON!  If you want to join us for this Special Virtual Ring Meeting on Thursday, April 2, please try to participate in the “test run”.

On behalf of the entire Ring 129 Board, I appreciate your understanding and cooperation during these trying times.  Please remember, heed the warnings and avoid large groups.

ATTENTION! BOARD MEETING CHANGED TO THIS WEEK DUE TO PASSOVER HOLIDAY.

ATTENTION!  PLEASE CHECK PRIOR TO MEETING FOR ANY CHANGES OR CANCELLATIONS AS WE CONTINUE TO DEAL WITH THE CORONAVIRUS EPIDEMIC!

ATTENTION!  PLEASE CHECK PRIOR TO MEETING FOR ANY CHANGES OR CANCELLATIONS AS WE CONTINUE TO DEAL WITH THE CORONAVIRUS EPIDEMIC!