Unfortunately, the lecture scheduled for this Wednesday night, March 18, 2020, has been postponed to a later date (to be determined).

We spoke with Kent Axell today and because many of their lectures have been cancelled due to the pandemic, we agreed that it would be in the best health interests of all to postpone the lecture and consider rescheduling it at a later time. 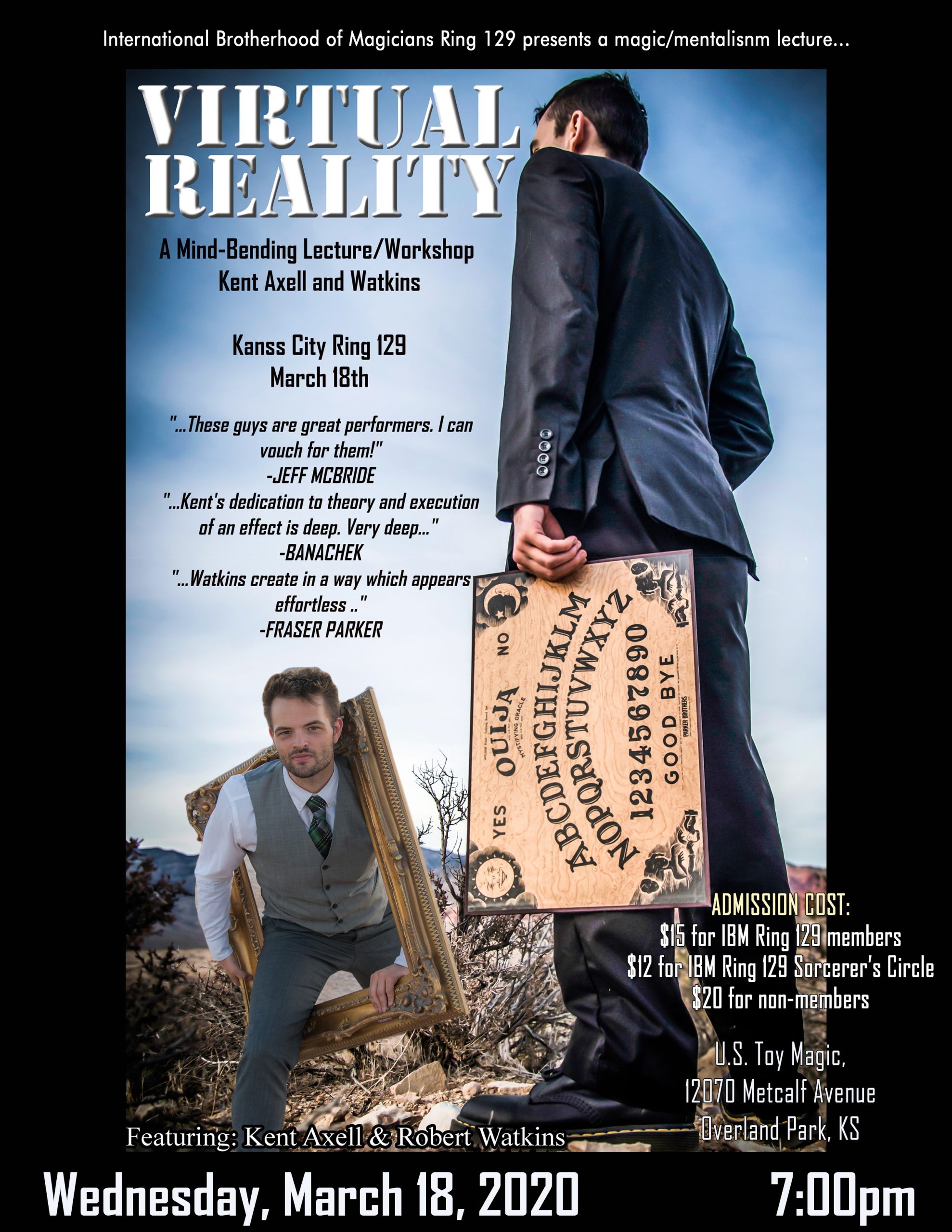 Remember the days when you only got 4-5 channels on your TV?  No cable… no Dish/Direct… no streaming…  just a good ol’ antenna on top of your house, or in some cases a pair of “rabbit ears” with tinfoil wrapped around them on top of your television.  As a kid magician, some of the best days of the year happened when the TV Guide (remember that magazine?) indicated there was going to be some “magic TV special” airing on a Saturday afternoon.  Keep in mind, in these “olden days”, we didn’t get to see magic or magicians very often.  During my youth, it was either a RARE television show, a magician at our school presenting a school assembly, or maybe a magic act at the Missouri State Fair in Sedalia.

Boy, things have certainly changed!  An unlimited supply of magic videos and specials are at our fingertips via our phones and computers.   With a few simple keystrokes you can enjoy the legendary performances of Cardini, Houdini, Shimada, Marvyn & Carol Roy, Blackstone… the list goes on and on.   Those who are just starting out in magic have no idea how lucky they are to have these resources so readily accessible.  But… are they really that lucky?

One of the biggest problems that occurs when watching or learning magic from video is the temptation to emulate or copy the other magician’s performance.  When I was a teenager and learning magic from my mentor Faucett Ross… oftentimes he’d loan me a book from his library and tell me to read such and such trick or tricks.  He told me to read the description of the effect and the explanation BEFORE he would show me the trick.  I’m sure the reason he adopted this teaching practice was because he didn’t want me to just “copy” what I had seen him do.  He wanted to spark my own creativity and presentational ideas before I saw someone else perform the trick.  Now that I look back at this… it makes so much sense.

Today, beginning magicians are bombarded with videos of performances… and that can make it very difficult for them to “throw out” what they’ve just seen and come up with their own way to present the trick or effect.

I always find myself admiring professional magicians who can take a “standard trick” and make it uniquely their own.  Eric Buss is great at doing this… so is Ed Alonzo, Tim Hannig, Chipper Lowell, Jeff Hobson and Derek Hughes.

The next time you’re working a new routine, try to think of creative ways you can “make it your own.”  It could be the patter, the theme, the music, etc.  Do something that puts a little piece of “you” in the presentation.  At our next Ring meeting (March 5), we’re going to try a little experiment in creativity.  It’ll be fun… and I’m sure you’ll find a genesis of new ideas or maybe a new approach to your magic.

See you at the March meeting!

I’ve had a number of really nice conversations with several members following the Annual Stage Contest.  These chats have been so positive about the new application process.  People seemed to find it easier and user friendly.    As I mentioned at the meeting, a few people were fairly close to becoming new members, and I think several members are excited about ‘joining’ the Sorcerers Circle.   Remember – all you have to do is participate in the Ring activities and functions, and you earn SC ‘points’.

Last month’s column mentioned:  attendance at meetings, lectures, shows, picnics, auctions, board meetings and teaching tricks, performing, buying and selling, and helping to set up and break down equipment.  But – there are other ways to enrich the club, and gain some Sorcerers Circle points.

Contributing to the newsletter is a great way to earn points.  Perhaps you’d like to contribute a magic book review, a trick review, or another written piece on magic.  I love the job that Steve Steiner does in assembling this newsletter every month, and I know that he enjoys having content from fellow Ring members to fill these (electronic) pages.

I always especially enjoy reading the articles by or about our Ring 129 members.  So, if you are so inclined, consider writing something for the newsletter and as space permits, Steve will work to include the submissions. Greetings from the home of the Super Bowl champion Kansas City Chiefs. (That’s got nothing about magic, but every fifty years or so we get to gloat).

January 26 we held our annual contest for Stage Magician of the Year, preceded by a Tex/Mex buffet, at the MTH theater. Since we are submitting a separate photospread, I’ll just describe it briefly here.

Other participants were Phil King, Stu Lewis, Roger Miller, Dennis Wilson, and Alan Goodheart. Larry Brodhall, visiting from Omaha, served as M.C., and Kirk DeWeese used his tech knowledge on sound and lights to give the show a professional look.

David Sandy presented a presidential citation to three members who had given exceptional service to the Ring: Duane and Jane Fields, and Steve Steiner.

French magician David Stone gave a lecture at the U.S. Toy & Magic Shop on February 4. His principal focus was on cards, with some bottle productions tossed in along the way. He is very entertaining, but I need to add a caveat that much of his repertoire consists of routines which require use of the unique gimmicks that he markets, so they may be of limited use to some card performers.

Our February meeting consisted of virtually non-stop activity for two and a half hours (David promised we would be done by 10:00, and he succeeded with seconds to spare). Ava Anderson (age 8) led off with a sponge rabbit routine and later conducted a teach-a-trick to show how she did it.

Shaun Rivera’s teach-a-trick was the somewhat familiar routine where you create a ladder with two rubber bands and have a folded bill descend step by step.

David then introduced a game in which seven members each had a letter taped onto their backs, forming a jumble which another group of seven had to solve.

David then returned to give us tips on how to pack magic apparatus when traveling to a show.

Tom Burgoon then entertained us with some humorous incidents from his many years of professional entertaining.

David came back again to show us a collectible item he recently purchased, a Milson Worth lightbulb penetration.

There were so many tricks and performances that I can only list them here. Phil King taught a card force.

Dennis Burks changed a Rubik’s Cube into a handful of M&M candy.

Stu Lewis honored the memory of recently deceased card man Simon Aronson by performing one of his routines.

Jerry Jackson performed a cut-and-restored rope routine using a dagger instead of the usual scissors.

Rob Novak, doing walk-around “because I can” (he recently had a hip replacement), vanished cards thought of by three spectators.

Phil King continued the theme of mentalism by divining the contents of a sealed envelope.

Finally, Terry Davolt told how he had recently posted an incident in which he singed his beard in a fireplace, leading Doc Blum (former Ring president who relocated to Dallas a few years ago) to send him a fire extinguisher. He also spoke of some other gags he and Doc had played on each other.

We were then out of time, and I’m out of room!